Question: One of the primary purposes of the Bradmoor Neighborhood Association is, “Fostering a greater sense of community though a range of activities including networking, social activities, and events.” In what type of events hosted in our neighborhood would you or your family be most likely to participate?

The initial stops were the intersections of McKinley Street and Hempstead Avenue, as well as McKinley and Irvington. The engineers expressed concerns on visibility problems at those intersections and felt that overgrown trees and shrubs should be cut back. They also commented on visibility problems from the commuter parking on both sides of McKinley Street and Garfield. The engineers would not rule out stop signs, but wanted to do a speed study. Other possibilities included curb “bump-outs,” painted cross-walks and yellow warning signs. They also thought a sidewalk on the west side of Hempstead would be reasonable to pursue. The engineers recommended that the neighborhood should identify trouble areas where sidewalks are needed, and then prioritize a list.

As we walked around the school, the engineers noted where crosswalks needed to be improved and intersections that did not have street signs. As we walked on Madison Street between Hartsdale and Bradmoor the engineers recognized a need for a sidewalk on the north side to connect Bradmoor Blvd. with the school.

We also walked through some areas of Huntington Terrace and saw where more painted crosswalks were needed as well as vegetation that should be cut back to improve visibility. The engineers also wanted to learn the exact new bus routes to the school and the impacts the routes could have on narrow streets by the school.

The engineers have submitted their report for internal review and will then make their recommendations known to the Bradmoor Neighborhood Association.

While it still looks like a construction zone now, Bradley Hills Elementary School construction will be completed in the coming months.  Landscaping and tree planting will play a large role in helping to make sure the new addition blends well into the neighborhood.  The charts below show what plantings will be used on the school property and where they will be planted.

In addition, a Beautification Committee to address a variety of neighborhood projects is being formed and will be led by neighbor Bill Primosch.  If you’d like to get involved, please contact BNA President (bradmoorpresident@gmail.com).

The April 11, 2013 conversation went very well with BNA members, a few non-members and visitors from our neighbors in Huntington Terrace. Ms. Reece noted that the school is on schedule for completion prior to the start of school in the fall. Among the many improvements will be:

The new building will also be home to approximately 100 additional students from Bethesda Elementary as part of the redistricting plan that helped fast-track the Bradley Hills construction. She also noted that over the last six years, the school enrollment has grown from 370 to just over 500 prior to the redistricting. All the students within the Bradmoor Neighborhood are ‘walkers.’

Together we explored areas where we could collaborate, including ideas around student safety while walking, ‘safe-homes’ project, a community tour of the finished building, a joint 5k race, and others. Ms. Reece noted that County policy instructs students to walk in the easements (aka front yards) in lieu of the street in areas where there are no sidewalks. In addition, the school appreciates the community’s oversight of the school property and alerting the school and/or police if there’s any suspicious activity. 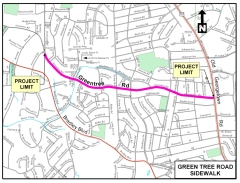 In case you’ve wondered about the construction and traffic slowdowns on Greentree Road, the Bradmoor Neighborhood Association got in touch with the county. They are in the process of adding a sidewalk on Greentree Road from Old Georgetown Road (MD 187) to Fernwood Road. The five-foot wide sidewalk will be on the north side of Greetree Rd. and will also include the installation of a retaining wall, curb and gutter, sidewalk ramps, driveways and expansion of the existing drainage system.

According to the county, construction will occur M-F from 7 a.m. to 5 p.m. with temporary lane closures for short periods between 9a.m.-3p.m. The construction, which began in the Fall, will take approximately 14 months to complete. (updated Feb. 20, 2013)

On Thursday, February 7, 2013, County Executive Ike Leggett spoke at the Bradmoor Neighborhood Association’s annual meeting. Mr. Leggett discussed the county budget – $4.9 billion – noting that more than half goes to the public school system. BNA members asked many questions, ranging from improving PEPCO reliability to road repairs to the purple line and the Bethesda metro. Over the course of more than an hour, however, the majority of time was spent discussing traffic calming, pedestrian safety and how the more effective neighborhood associations engage the County. Many ideas and options were raised, with Mr. Leggett offering to have engineers walk the neighborhood with our community in the future to discuss our issues and devise potential solutions.

Following the discussion with Mr. Leggett, the BNA business meeting was held, summarizing the Association’s accomplishments over the first six months, membership and finances. Gwenn Klingler was successfully voted onto the Board, filling the At-Large vacancy.